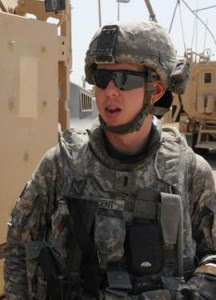 Lt Vincent graduated from Mesquite High School and attended University of Texas in Arlington, where he studied engineering.

He joined the Army in 2009 and served as an artillery officer.This was his first deployment.

Lt Vincent married wife two days before deployed and had adopted her daughter.

Step-sister, Chandra Usry, described Lt Vincent as loving, selfless and kind, stating that he took her right in when they were brought together by marriage a few years ago.

Lt Vincent's awards and decorations include:

I didn't know him but attended his memorial here in Iraq today. His soldiers loved him and his commanders thought very highly of him. Funny thing, they teased him about always looking forward to "taco day" in the dining facility. He said he loved tacos because he was from Texas and it reminded him of home.~Kevin M.

Posted by Terri Rager-Campbell at 3:04 PM