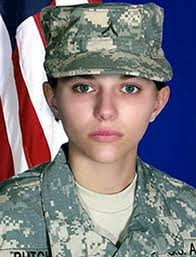 “Spc. Sarina Butcher left her friends, family and a young child to help defend our nation,” Maj. Gen. Myles Deering, adjutant general for Oklahoma, said in a statement. “She was a brave young woman who selflessly gave all she had for her country and the other soldiers that served alongside her.”

Following in her grandfather's and brother's footsteps, Spc Butcher joined the National Guard to help finance and pursue her career dreams of becoming a nurse while also helping to support her daughter, Zoey.

Spc Butcher joined the Guard in April 2010 and served as an automated logistical specialist. She deployed in June.

Her grandmother, Martha Wills, described her as a much-loved daughter, sister, granddaughter and mother.

She was really outgoing and there was no one that wasn't her friend," said mother Dana Bailey.

“She was barely 5 foot 2, and her heart was bigger than she was,” grandfather, James Clayton Mills said.

"I tried to instill in her, good traditions and things about the military. She always looked up to me as her hero, but today, she's my hero," her grandfather said.

Mills says Sarina's spirit lives on through her daughter. "Sarina used to sit and talk, throw her hand on her hip. Zoey does the same thing at two and half years old. So she's going to up and be another Sarina."

Spc Butcher's awards and decorations include:

Posted by Terri Rager-Campbell at 4:31 PM