Lcpl Daniels graduated from Saint Patrick High School in 2004, where he played football, and later coached football for his alma mater.

Lcpl Daniels joined the Marines in January 2010. He reported on September 3 and left for his first tour of duty in Afghanistan 16 days later. He had only been in Afghanistan for six weeks when he was killed. He served as a combat engineer.

Oldest of four children, Lcpl Daniels aspired to become a police officer. Family and friends described Nick as a very happy, fun loving young man, who was very driven, dedicated, and goal oriented. He planned to marry his fiancee, Katie, when he returned home.

"Everybody always thinks it's not going to happen to their family but it's real and it happens," said family friend Joe Pullia.

His sister, Kati, said that L-Cpl Daniels had joined the Marine Corps less than two years ago and was trained in bomb disposal.

"I just didn't believe it because he was only there for a month and a half and he just got an award for digging up a bomb, and then this happened. And I didn't want to believe it when (the Marines) came to our house," she said.

"We're going to be here in the back for the procession and then when he walks out, we're all going to take a knee to remember Nick and how he was our coach," said Ryan Tentler, co-captain of the football team.

"It hit us pretty hard just because he was a shamrock. Most of us knew him because we all played football. He was a great coach," said Zeck Jankeiwicz, football team co-captain. 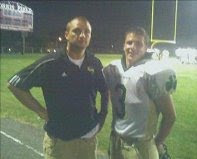 Lonny Daniels says his big brother was always up for a challenge and loved competition. Lonny says he will always remember Nick as cool guy who watched out for his younger siblings.

"I always aspired to be like him. He was always fast, athletic, the girls loved him," Lonny said. "He's really funny, probably one of the funniest guys. He had a really good attitude with everybody. Everybody loved him."

"For me personally, it's very difficult to wrap my mind around. But it's so much more about him and what a special person he was," said Timothy Woods, friend and co-worker.

Lcpl Daniels was laid to rest on November 13 at Elmwood Cemetery in River Grove.

Posted by Terri Rager-Campbell at 1:45 PM