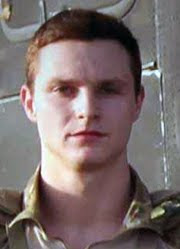 Upon graduation he enlisted in the United States Army where he served as a rifleman, grenadier, automatic rifleman, gun team leader and a Ranger team leader.

Sgt. Higgins was currently serving in the Hunter Army Airfields First Battalion, 75th Ranger Regiment. He had completed four deployments to the Middle East, one to Iraq and three to Afghanistan; he was serving his fourth tour in Afghanistan.

He was posthumously awarded the Bronze Star Medal, Meritorious Service Medal and the Purple Heart.

Posted by Terri Rager-Campbell at 3:51 PM