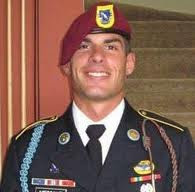 WEST PALM BEACH — Seven-month-old Rylee O'Keefe was quiet but alert as she rested in her mother's arms Wednesday morning.

The infant niece who U.S. Army Pfc. Michael Metcalf called "Rye Rye" was on the tarmac with other family and friends who gathered to welcome him home for the last time. Nothing disturbed her. Not the roar of jets taking off and landing, nor the buzz of the growing crowd.

Then, as the coffin carrying the body of Metcalf, her dad's best friend, was removed from the white Kalitta Charters plane and onto the tarmac, Rylee cried.

It was as if she suddenly channeled the swell of emotion overcoming the crowd of about 60-plus waiting to honor the Boynton Beach soldier who died after a roadside bomb exploded on April 22 in Paktia, Afghanistan.

Rylee grew silent again as the six Army soldiers acting as pallbearers carefully placed the coffin down in front of the group.

Metcalf's mother, Kim, and her boyfriend, Matt DiGennaro, stepped forward. Kim Metcalf placed her hands on her son's coffin, which was draped with an American flag. She collapsed over it, and DiGennaro over her.

"I can't believe all the people. My son would He's in his glory," Kim Metcalf said while tears streamed from her eyes. "He really sees how many people loved him. How many people really adored both of us."

Before the plane carrying Metcalf arrived around 10 a.m., everyone gathered in the parking lot just outside the tarmac near Galaxy Aviation.

Dixie Thiery, whose daughter once dated Metcalf, handed out dozens of hand-held American flags. "She did barrel racing and he did bull riding," she said. "He used to call me Mama Dukes."

Good friends of Michael Metcalf - Jaclyn Murray, Brooke Lintner and Mandy Eichorst - created "Welcome Home" signs and laid them along a fence. They decorated the signs with hearts, and placed three American flags in between each.

Eichorst wore a cowboy hat and tan cowboy boots to honor Metcalf, who was also a skim boarder and whom she had known since elementary school, she said.

"He was a class clown. Always making people laugh," she said. "I wish his homecoming was a little bit different, but I'll see him again."

While the group waited for the gate to slide open, allowing them to greet their hero on the tarmac, members of the Pompano Beach-based American Legion Post 142 Riders gathered together.

"It's a sign of respect. When we came home we had no welcome, nothing." said Ronald Bowlay, a Vietnam War veteran . "It's a solemn occasion because the lad is only 22 years old."

Just before the plane arrived, Metcalf's family and friends were escorted onto the tarmac. Palm Beach County Fire Rescue did a water cannon salute as the plane taxied through. After Kim Metcalf and DiGennaro had their moment with the body of the slain soldier, Kim Metcalf invited some of the other onlookers to pay respects.

His comrades saluted him.

The pallbearers gently placed Metcalf's body in a Vietnam-era Huey helicopter restored by a Loxahatchee-area veteran, which would later take Metcalf's body to the Glick Family Funeral Home in Boca Raton.

While watching, Kim Metcalf quietly said to herself, "Beautiful."

Some of Metcalf's closest friends, including Brandon O'Keefe and T.J. Fitzgerald, strode up to the helicopter and peered through one of its windows.

With their arms around one another, they said a prayer. They all quietly kissed their hands and gently placed them on the window.

"Mike was our best friend," O'Keefe said. "He'll always be with us."

Before he was taken away, Army Spc. Trenton Blanchard walked over to Kim Metcalf to pay respects.

Blanchard was in the same company as Metcalf and hadn't left his side since he died.

He said Metcalf always had a smile on his face and was always cheerful.

After Blanchard told Metcalf this, she turned around to her loved ones and said, "He hasn't left Michael since the hospital."

Blanchard then told Metcalf of a time when her son came back to Afghanistan after taking a short leave recently. He told the grieving mother that her son showed up in civilian clothes, wearing cut-off blue jeans.

She smiled, let out a contained laugh and said, "That was him."

Posted by Terri Rager-Campbell at 10:49 AM