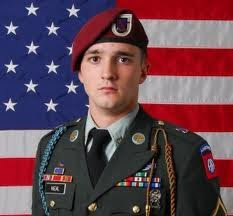 Neal was the son of Don and Trish Neal, who run a dairy farm in Spring ValleyTownship in western Rock County. Neal was on his second tour in Afghanistan, Knudson said.

"You read about it in the paper all the time,” Knudson told The Gazette late Thursday. “I guess until reality sets in and, for a family that you like and respect so much, something terrible like this happens … ” Knudson, a Rock County supervisor, read a statement during the invocation before the county board meeting Thursday night. Neal was a hardworking man who loved the land, his country and his family, Knudson said.

“I wish I had even an ounce of the courage and backbone of my neighbor Ben Neal,” Knudson said.

Neal was assigned to the 1st Battalion, 508th Parachute Infantry Regiment, 4th Brigade Combat Team, 82nd Airborne Division at Fort Bragg, N.C. He graduated in 2009 from Parkview High School, where he was an honors student, according to Gazette records. He was a member of the Plymouth 4-H Club.

“He’s always been a leader and dedicated in what he was doing,” Steinman said. “He was one heck of a wrestler, a four-time sectional qualifier.

“When he talked, kids listened. They respected him.”

Steinman said he was Neal’s coach in high school and his friend after Neal graduated. Steinman is a Gulf War veteran, and the two had a lot in common, he said.

Parkview Superintendent Steve Lutzke said Neal “just felt a need to serve” and went into the military after graduating.

Lutzke remembers Neal for his “wonderful personality” and his strong faith.

Neal knew the commitment he was making to serve overseas, Steinman said.

“He was a great young man, a smart young man,” Steinman said. “If you truly want to name a hero, that’s Ben. He did die for what he believed in, for us.”

Posted by Terri Rager-Campbell at 2:08 PM