Spc. David W. Taylor worked hard to be a good soldier. His former platoon leader said the young man, a native of Dixon, "was probably one of the most outstanding paratroopers in the whole platoon, just striving to be the best."

Striving to be the best in Army fitness tests, Spc. Taylor did the Crossfit physical fitness program five to six days a week, his platoon leader said.

The 20-year-old from Dixon died March 29 in Kandahar province in Afghanistan as the ammunition he was helping move exploded.

Spc. Taylor was on his first deployment when he died. He had joined the Army two years ago and attended training at Fort Benning and had graduated from the Warrior Leaders Course. He was assigned to the 2nd Battalion, 508th Parachute Infantry Regiment, 4th Brigade Combat Team, 82nd Airborne Division at Fort Bragg, N.C. 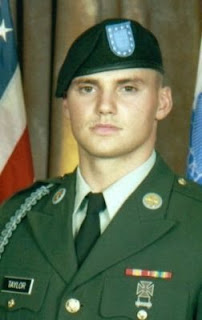 He was deployed to Afghanistan March 12, according to a family friend.

"It was evident since the day I met him that David had all the qualities desirable in a paratrooper: smart, aggressive, committed and reliable. He displayed them readily in everything he did," Capt. Brian W. Bifulco, his company commander, told a reporter after his death.

He is survived by his mother, Sarah Whitledge Taylor of Poseyville, Ind.

Army Spc. David W. Taylor was killed in an accident in Afghanistan on 3/29/12.


Posted by Terri Rager-Campbell at 3:40 PM