IDAHO FALLS, Idaho -- After arriving in Idaho via charted aircraft on Sunday, the body of U.S. Army Sgt. Ryan David Sharp was laid to rest at Rose Hill Cemetery in Idaho Falls on Monday afternoon.

Sharp died Dec. 3 from injuries sustained in an I.E.D. attack during his third tour of duty in Afghanistan.

At Monday's service, Sharp's sister Michelle Harrison delivered his "Life Sketch." She spoke of a boy who grew up loving childhood.

Harrison spoke of her brother's close relationship with their grandmother, who would often call him, "My Ryan."

"Everyone knew Cpl. Sharp," said Gayhart during the service.

Sharp's rank was upgraded from corporal to sergeant after his death.

The other soldier's in Sharp's company returned home to the U.S. this week. Harrison said the timing was bittersweet, but that Sharp's family is glad his brothers are coming home safely. 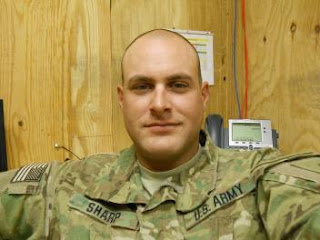 Sharp planned to be honorably discharged in May 2012

IDAHO FALLS -- Roughly 200 people gathered at the Idaho Falls Airport to honor the return of a fallen soldier.

Army Sgt. Ryan D. Sharp's body was returned to his family in a ceremonial transfer on Sunday. Family spokeswoman and Sharp's sister-in-law, Karen Sharp, said the family was impressed and overwhelmed by the outpouring of support from the community and the Army.

Sharp was serving in Afghanistan when he was injured by an improvised explosive device on Nov. 21. Doctors put him in a medical coma and transferred him to a hospital in Germany for treatment, but he did not survive his wounds. Funeral services were scheduled to begin Monday morning.

Posted by Terri Rager-Campbell at 2:07 PM