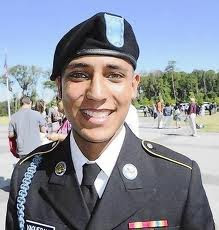 Pvt Vaquerano was critically wounded in Logar Province and transported hosptial in Landstuhl, Germany. His parents and fiancee, Katie Madden, were at his bedside when he passed away. Katie and Jalfred were to be married soon.

Katie wrote in a note to family and friends, "The last words I said to him were 'I can't wait to be your wife,' and his were 'Me either, I love you.'"
Pvt Vaquerano graduated from Forest Lake Academy in Apopka.

Pvt Vaquerano enlisted in the Army in January, 2011. He served as an infantryman.

His father, Carlos Vaquerano, thanked the scores of well-wishers.

"From His dad Carlos: thank you very much. Jalfred was the sweetest of all. I love you my son and I know I'll be with you soon. Jesus come soon please."

Pvt Vaquerano's awards and decorations include:

Posted by Terri Rager-Campbell at 2:01 PM