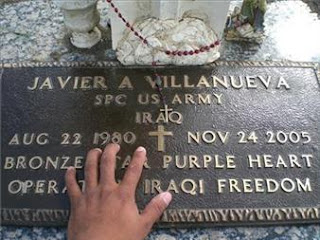 SPC Villanueva was born Aug. 22, 1980 to Wilfredo Rivera and Christine Lebron. He was raised in Waco and graduated from La Vega High School in 1998.

After high school he attended TSTC in Waco for 2 years.

SPC Villanueva started work for Albertsons and Taco Bell in Waco and moved to Temple where he worked at Ross clothing store for 2 years and also met his wife.

On May 15, 2003 SPC Javier Villanueva and Felicia Owens were married.

SPC Villanueva joined the Army Sept. 16, 2003, and became a medical specialist stationed at Fort Sill, Okla., Ft. Sam Houston in San Antonio and Fort Irwin, Calif. before going to Iraq in Jan. of 2005 and was scheduled to return Dec. 27, 2005.

Posted by Terri Rager-Campbell at 1:49 PM